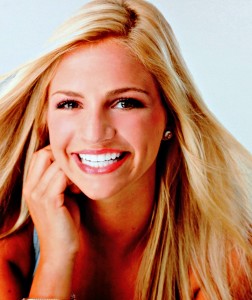 Anyone who has visited our office since the expansion has seen this beautiful photo hanging on the wall. Bailie is currently a student at Miami University of Ohio, where she is studying marketing with hopes of pursuing a career in pharmaceutical and medical sales.

But Bailie has a more interesting story. During her senior year of high school, Bailie traveled to LA to compete in a national dance competition. While there, she noticed that the LA Laker Girls were holding open auditions. Bailie decided that this was her calling and, surprisingly, she made the team. After her high school graduation, Bailie moved to LA and performed at the LA Laker games throughout the 2010-2011 season. While living in LA, Bailie also had the opportunity to dance in a Panic at the Disco music video.

Bailie has been a patient of Frankel Dentistry her entire life. Her father and Dr. Frankel went to high school together. Today, being in school, Bailie is sure to get her dental check-ups in when she is home on break.